Assessing the War in Ukraine and the New Security Landscape 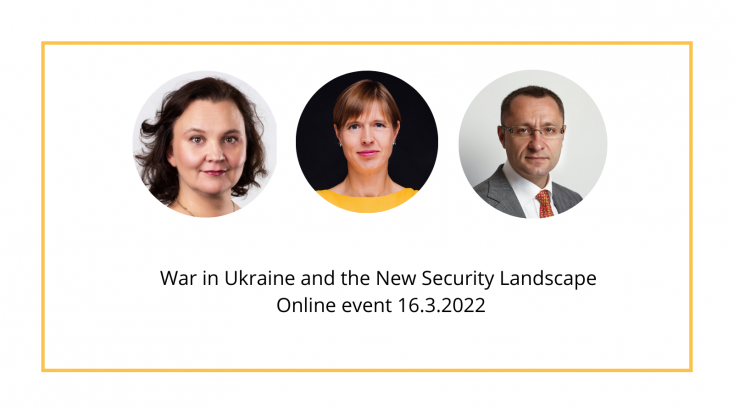 Elisabeth Rehn Bank of Ideas and E2 Research organized an online event War in Ukraine and the New Security Landscape on March 16, 2022. The event was attended by more than 100 foreign and security policy experts and media representatives. The purpose of the event was to hear about the current situation in Ukraine on the ground, and to find answers to what the Nordic and Baltic states could do more to support Ukraine and improve common security. The event was a kickoff for a joint research project of the two Finnish research institutes on strengthening the Nordic-Baltic co-operation in security, preparedness, and resilience.

The speakers of the event were Mr. Vasyl Myroshnychenko, Advisor to the Minister of Defense of Ukraine, Dr. Hanna Smith Director of Research and Analysis at the European Centre of Excellence for Countering Hybrid Threats, and Ms. Kersti Kaljulaid, Former President of Estonia. The discussion was moderated by Ms. Anna Tervahartiala, Vice-Chair of Elisabeth Rehn Bank of Ideas, and the opening remarks were given by Dr. Mari K. Niemi, Research Director of E2 Research and Dr. Kaisa-Maria Tölli, Chair of Elisabeth Rehn Bank of Ideas.

Dr. Smith defined the background for the discussion.

Dr. Smith also pointed out that Russia’s strategic goal is to lower a new iron curtain into Europe and prevent the west from expanding into the east. Putin is ready to go far. Whether NATO will be able to stop Putin's conquest plan is a question mark. What comes to Finland's and Sweden's possible NATO membership, and if the process progresses quickly, Russia's reaction may not be very strong because Putin's focus is on Ukraine, sanctions, and the repression of the opposition.

– If we wait a year and Russia wins the war, the situation will be much more serious. 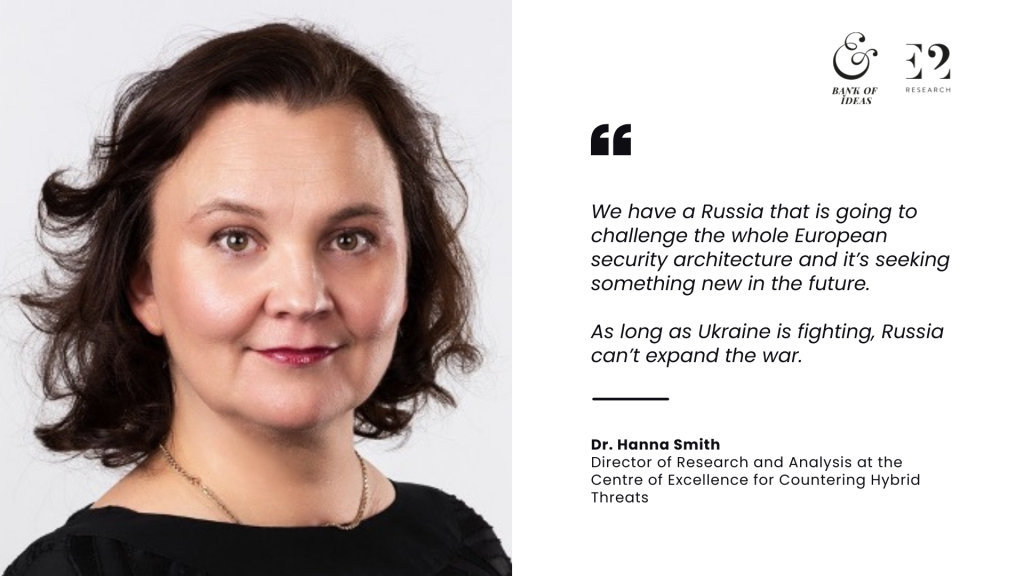 Mr. Myroshnychenko did not believe that Russia will stop in Ukraine. He saw the war as an opportunity for Russia to test NATO and its response. Although it was noted in the discussion that Russia's invasion of Ukraine has not proceeded as planned, the situation remains open.

Madam President Kaljulaid recalled that every time the world starts to talk about Ukraine and its options and possibilities, they should first remind the sights which we can see daily in Ukraine.

– We can say that Russia has already lost this war, but Ukraine has not won it yet.

– Whenever someone starts to show signs that they are not respecting international law they should be stopped there and then.

She believes that the world leaders missed a historic moment in 2008 after the Georgian war. In 2007 Vladimir Putin stated in Munich Security Conference that he wants to rewrite the international security order and give more space to decide for all those who have power. 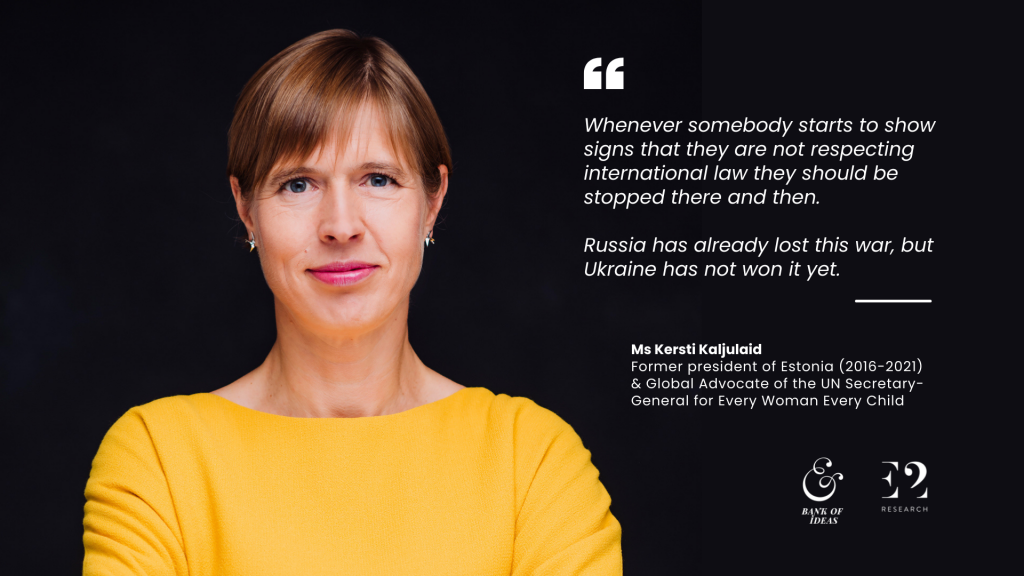 – We didn’t negotiate, but we didn’t act when Putin acted in Georgia. This is a lesson for the future. Each time from now the world must be able to stop those who are leading international legal space to achieve their own objectives. We should react and act sooner.

In this context, President Kaljulaid also refers to the Helsinki Final Act, the principles of which cannot be celebrated now in its 50th anniversary, when Russia has deeply violated them.

Mr. Myroshnychenko, in turn, assessed the reasons why Ukraine has managed to be so resilient.

– One of the reasons is that this war has been going on already eight years.

Before the Russian attack, the Ukrainian armed forces had already gained the necessary experience in combat, its civil society was well organized, and a lot of NGOs had emerged to support the government and the authorities. Society was well prepared for resilience and civil defense.

– If you look at the beehive, you can see a horizontal organization. The bees know what to do. Once the bees are under threat, they get united. So, when a bear comes and wants to destroy the beehive, the bees are ready to sting. And when they sting, they die. So, there’s a high level of sacrifice, quick mobilization, and an ability to build horizontal structures. This is what we can see in Ukraine. Because the level of the total resistance to the Russian invasion is something that Russia never expected. People reunited whether they were Russian or Ukrainian speaking, Orthodox, Catholic, Muslims or Jews. 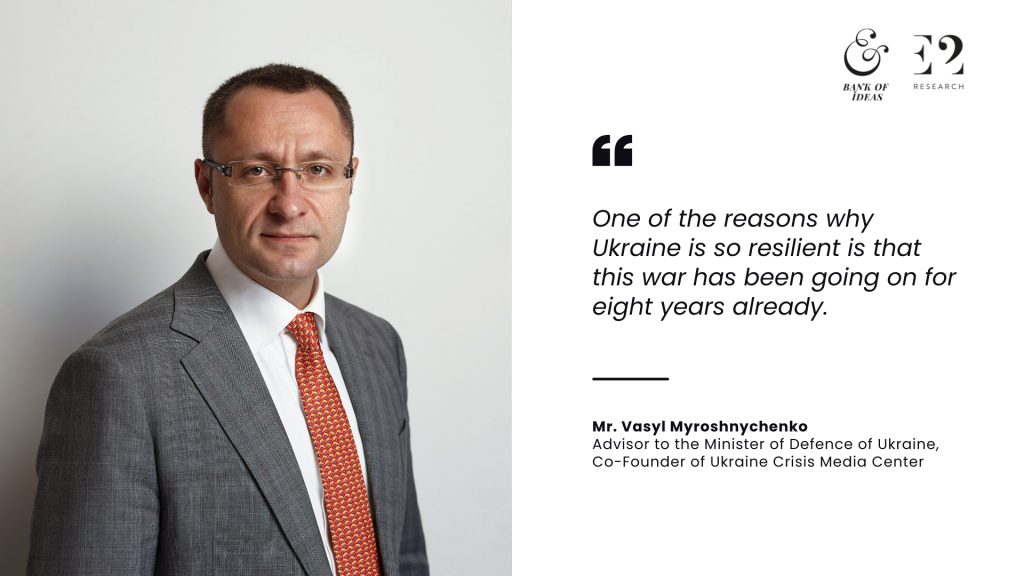 One of the main goals of the event was to find ways to resolve the conflict and prevent escalation. President Kaljulaid emphasized that we must constantly pay attention to the loopholes in the sanctions against Russia and try to close them. In addition, she called the need to start a negotiation process in which Ukraine – and possibly also Georgia and Moldova – could immediately become an EU candidate country. President Kaljulaid saw this as crucial for Ukraine's morality and will to fight. Dr. Smith shared President Kaljulaid's concern, stating that as long as Ukraine is fighting Russia can’t expand the war.

Watch the full recording of the event here: The War in Ukraine and the New Security Landscape Online Event